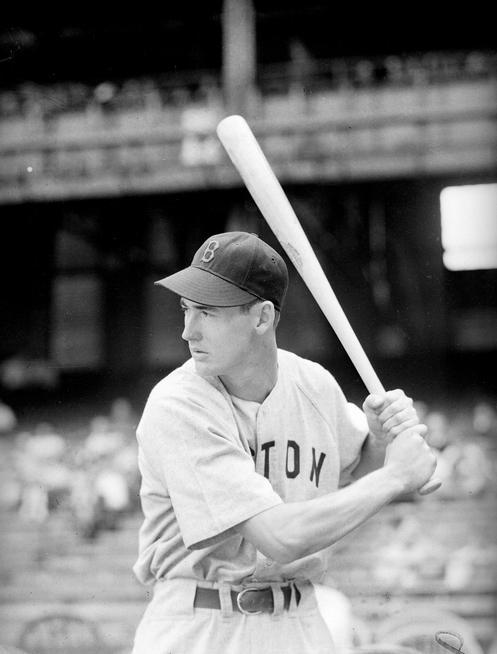 On this day in 1941, the Boston Red Sox’s Ted Williams plays a double-header against the Philadelphia Athletics on the last day of the regular season and gets six hits in eight trips to the plate, to boost his batting average to .406 and become the first player since Bill Terry in 1930 to hit .400. Williams, who spent his entire career with the Sox, played his final game exactly 19 years later, on September 28, 1960, at Boston’s Fenway Park and hit a home run in his last time at bat, for a career total of 521 home runs.

Williams was born on August 30, 1918, in San Diego, and began his major league career with the Red Sox in 1939. 1941 marked Williams’ best season. In addition to his .406 batting average–no major league player since him has hit .400–the left fielder led the league with 37 homers, 135 runs and had a slugging average of .735. Also that season, Williams, whose nicknames included “The Splendid Splinter” and “The Thumper,” had an on-base percentage of .553, a record that remained unbroken for 61 years, until Barry Bonds achieved a percentage of .582 in 2002.

In 1942, Williams won the American League Triple Crown, for highest batting average and most RBIs and homeruns. He duplicated the feat in 1947. In 1946 and 1949, he was named the American League’s Most Valuable Player and in June 1960, he became the fourth player in major league history to hit 500 homers. He was selected to the All-Star team 17 times.

Williams played his last game on September 28, 1960, and retired with a lifetime batting average of .344, a .483 career on-base percentage and 2,654 hits. His achievements are all the more impressive because his career was interrupted twice for military service: Williams was a Marine Corps pilot during World War II and the Korean War and as a result missed a total of nearly five seasons from baseball.

Williams, who was inducted into the Baseball Hall of Fame in 1966, managed the Washington Senators (renamed the Texas Rangers in 1972) from 1969 to 1972. In 1984, the Boston Red Sox retired his uniform number (nine). Williams died of cardiac arrest at age 83 on July 5, 2002, in Florida. In a controversial move, his son sent his father’s body to be frozen at a cryonics laboratory.

GENERAL INTEREST
1066
William the Conqueror invades England
Claiming his right to the English throne, William, duke of Normandy, invades England at Pevensey on Britain’s southeast coast. His subsequent defeat of King Harold II at the Battle of Hastings marked the beginning of a new era in British history.William was the illegitimate son ...

GENERAL INTEREST
1994
Estonia sinks
On this day in 1994, 852 people die in one of the worst maritime disasters of the century when the Estonia, a large car-and-passenger ferry, sinks in the Baltic Sea.The German-built ship was traveling on an overnight cruise from Tallinn, the capital city of Estonia, to Stockholm, ...

GENERAL INTEREST
48 B.C.
Pompey the Great assassinated
Upon landing in Egypt, Roman general and politician Pompey is murdered on the orders of King Ptolemy of Egypt.During his long career, Pompey the Great displayed exceptional military talents on the battlefield. He fought in Africa and Spain, quelled the slave revolt of Spartacus, ...

GENERAL INTEREST
1989
Marcos dies in exile
Former Philippines president Ferdinand Marcos, whose corrupt regime spanned 20 years, dies in exile in Hawaii three years after being driven from his country by a popular front led by Corazon Aquino.Elected in 1966, Marcos declared martial law in 1972 in response to leftist ...

GENERAL INTEREST
1542
Cabrillo encounters California
Portuguese explorer Juan Rodriguez Cabrillo sails into present-day San Diego Bay during the course of his explorations of the northwest shores of Mexico on behalf of Spain. It was the first known European encounter with California.At San Diego, Cabrillo landed at Point Loma Head, ...