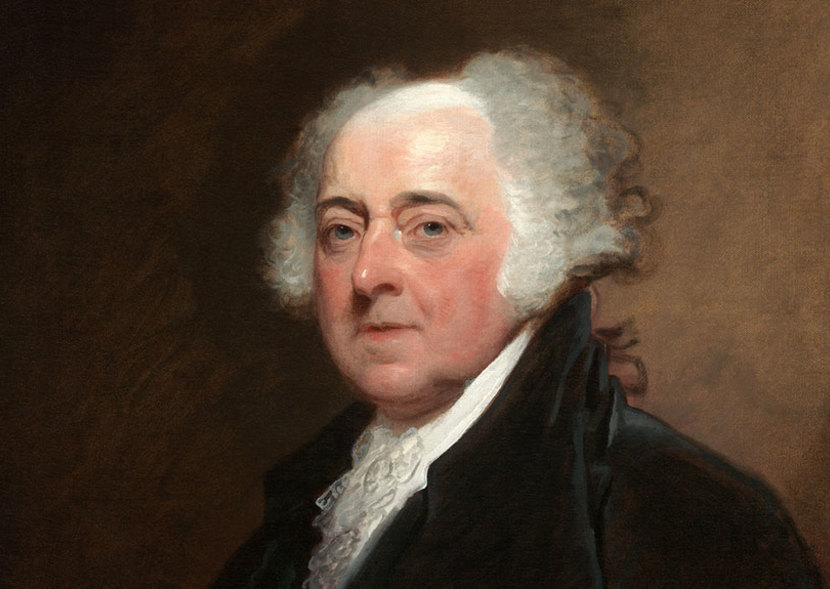 On this day in 1779, the Continental Congress appoints John Adams to travel to France as minister plenipotentiary in charge of negotiating treaties of peace and commerce with Great Britain during the Revolutionary War.

Adams had traveled to Paris in 1778 to negotiate an alliance with France, but had been unceremoniously dismissed when Congress chose Benjamin Franklinas sole commissioner. Soon after returning to Massachusetts in mid-1779, Adams was elected as a delegate to the state convention to draw up a new constitution; he was involved in these duties when he learned of his new diplomatic commission. Accompanied by his young sons John Quincy and Charles, Adams sailed for Europe that November aboard the French ship Sensible, which sprang a leak early in the voyage and missed its original destination (Brest), instead landing at El Ferrol, in northwestern Spain. After an arduous journey by mule train across the Pyrenees and into France, Adams and his group reached Paris in early February 1780.

While in Paris, Adams wrote to Congress almost daily (sometimes several letters a day) sharing news about British politics, British and French naval activities and his general perspective on European affairs. Conditions were unfavorable for peace at the time, as the war was going badly for the Continental Army, and the blunt and sometimes confrontational Adams clashed with the French government, especially the powerful Foreign Minister Charles Gravier, Comte de Vergennes. In mid-June, Adams began a correspondence with Vergennes in which he pushed for French naval assistance, antagonizing both Vergennes and Franklin, who brought the matter to the attention of Congress.

By that time, Adams had departed France for Holland, where he was attempting to negotiate a loan from the Dutch. Before the end of the year, he was named American minister to the Netherlands, replacing Henry Laurens, who was captured at sea by the British. In June 1781, capitulating to pressure from Vergennes and other French diplomats, Congress acted to revoke Adams’ sole powers as peacemaker with Britain, appointing Franklin, Thomas Jefferson, John Jay and Laurens to negotiate alongside him.

The tide of the war was turning in America’s favor, and Adams returned to Paris in October 1782 to take up his part in the peace negotiations. As Jefferson didn’t travel to Europe and Laurens was in failing health after his release from the Tower of London, it was left to Adams, Jay and Franklin to represent American interests. Adams and Jay both distrusted the French government (in contrast with Franklin), but their differences of opinion and diplomatic styles allowed the team to negotiate favorable terms in the Peace of Paris (1783). The following year, Jefferson arrived to take Adams’ place as American minister to France, forming a lifelong bond with Adams and his family before the latter left to take up his new post as American ambassador to London and continue his distinguished record of foreign service on behalf of the new nation.

GENERAL INTEREST
1540
Jesuit order established
In Rome, the Society of Jesus–a Roman Catholic missionary organization–receives its charter from Pope Paul III. The Jesuit order played an important role in the Counter-Reformation and eventually succeeded in converting millions around the world to Catholicism.The Jesuit movement ...

GENERAL INTEREST
1960
Sylvia Pankhurst dies
Sylvia Pankhurst, British suffragette and international socialist, dies in Addis Ababa, Ethiopia, at the age of 78.Born in Manchester, England, in 1882, Sylvia Pankhurst was the daughter of Emmeline Pankhurst, a champion of woman suffrage who became active in the late 1880s. ...

VIETNAM WAR
1969
Thieu comments on Nixon’s Vietnamization policy
President Nguyen Van Thieu says his government entertains no “ambition or pretense” to take over all fighting by the end of 1970, but given proper support South Vietnamese troops could replace the “bulk” of U.S. troops that year. Thieu said his agreement on any further U.S. ...

VIETNAM WAR
1967
Antiwar sentiment increases
An advertisement headed “A Call To Resist Illegitimate Authority,” signed by over 320 influential people (professors, writers, ministers, and other professional people), appears in the New Republic and the New York Review of Books, asking for funds to help youths resist the ...

SPORTS
1930
Bobby Jones wins U.S. Amateur title
On this day in 1930, golfer Bobby Jones wins his fourth major tournament of the year, making him the first person ever to win the “Grand Slam” of golf. Jones beat Gene Homans in match play format, 8 and 7, meaning he was eight holes ahead with just seven holes left to play.Bobby ...