The List 4822
Back home and trying to send out those that are backed up
To All,
Hope that your week has been going well.
Regards
Skip
This day in Naval History
Sept. 27
1860—A landing party of Marines are put ashore at Panama from the sloop-of-war, USS St. Mary's, during an insurrection. The Marines capture the railroad station in an attempt to establish order.
1863—During the Civil War, the steamer USS Clyde seizes the Confederate schooner Amaranth near the Florida Keys.
1941—SS Patrick Henry, the first U.S. Liberty ship, is launched by President Franklin D. Roosevelt at Baltimore, MD. Numerous other vessels are launched on that day, known as "Liberty Fleet Day."
1942—The freighter, SS Stephen Hopkins, engages the German auxiliary cruiser, Stier, and supply ship, Tannenfels, in a surface gunnery action in the central South Atlantic. Stier sinks SS Stephen Hopkins but the German raider sinks after having receiving heavy damage by SS Stephen Hopkins' naval armed guard, Lt. j.g. Kenneth M. Willett. For his actions, Willett posthumously receives the Navy Cross.
1942—While leading a group of landing craft during the Guadalcanal Campaign, Signalman 1st Class Douglas A. Munro, USCG, participates in the evacuation of the First Battalion, Seventh Marines from Matanikau River, Guadalcanal. Using his boat as a shield between the Japanese and the Marines, he enables the operation to proceed successfully, but is killed by enemy gunfire. For his "extraordinary heroism and conspicuous gallantry", Munro is posthumously awarded the Medal of Honor.
1955—A P2V-5 Neptune patrol plane of Early Warning Squadron 4 is lost with nine crew members and two journalists while tracking Hurricane Janet over the Caribbean Sea.
1986—USS Chicago (SSN 721) is commissioned at Norfolk, VA. The Los Angeles-class nuclear attack submarine is the fourth U.S. Navy ship to be named after the Windy City of Illinois, and is ideally suited for covert surveillance, intelligence gathering and special forces missions.
Thanks to CHINFO
Executive Summary:
National news headlines are dominated with the Senate hearing scheduled for today for SCOTUS nominee Kavanaugh and the search of a missing boy with Autism in North Carolina. Assistant secretary of the Navy for Research, Development and Acquisition James F. "Hondo" Geurts told reporters that the Navy is moving towards block bidding of ship maintenance reports Seapower Magazine. "We've got a real challenge and opportunity ahead on how we operate [the Navy's] repair enterprise at speed," said Geurts. The Wall Street Journal reports that the House passed an approbations bill on Wednesday that increases military spending and that will keep the government open through Dec. 7, averting a potential shutdown. Additionally, Navy Times reports that sailors that go 12 consecutive months not qualified for sea duty will be reviewed for involuntary separation.
Today in History September 27
NNNNNNNNNNNNNNNNNNNNNNNNNNNNNNNNNNNNNNNNNNNNNN
Thought this should be high lighted again!!!Not nice and if your squeemish you probavly shouldn't read it!!!
https://www.frontpagemag.com/fpm/271415/castros-torture-american-pows-vietnam-jamie-glazov

The death of communist tyrant Fidel Castro has yielded much-deserved coverage of the monstrous nature of his tyrannical rule. What has gone virtually unreported, however, is the direct and instrumental role Castro played in the torture and murder of American POWs in Vietnam during the Vietnam War ...
NNNNNNNNNNNNNNNNNNNNNNNNNNNNNNNNNNNNNNNNNNNNNNNNNN
H-Gram 021, Attachment 2
Samuel J. Cox, Director NHHC
September 2018
Operation Husky: The Invasion of Sicily, 10 July 1943
The hastily planned Allied invasion of mainland Italy at Salerno (Operation Avalanche) commencing on 9 September 1943 nearly ended in disaster. The effects of naval gunfire support were a significant factor, if not the major factor, in preventing the Germans from defeating the landings (actually, bad decisions by Adolf Hitler in holding back resources from the overall German commander in southern Italy, Field Marshal Kesselring, were probably the primary factor). The Allied plan relied heavily on surprise, which the U.S. naval commander, Vice Admiral H. Kent Hewitt, argued would not be achieved. Hewitt reasoned that because Salerno was the closest beach near the key port of Naples that was still within range of land-based Allied fighter cover, the Germans would have no problem predicting where the landings would come. As it turned out, Kesselring was unwittingly in complete agreement with Hewitt's analysis. The Allies would find the sea approaches to Salerno heavily mined, and a crack Panzer division itching for a fight on the beach (and more divisions in support, although not enough as it turned out). In order to preserve the (non-existent) element of surprise, the senior Allied ground commanders decided on a night landing, with no pre-landing naval bombardment, over the objection of Admiral Hewitt. Instead of meeting Italian troops eager to surrender, the initial wave of Allied troops was met by German loudspeakers inviting the Allied troops to come in and surrender, because the Germans had them covered. The Allies came in anyway, but not to surrender, and a brutal and bloody fight commenced.
In my previous H-gram (H-020), I ran out of gas in discussion of the Allied invasion of Sicily (Operation Husky), so I will backtrack some because Husky is important to the understanding of Avalanche. Although the purpose of H-grams is to focus on U.S. naval operations, a little bit of the development of Allied strategy in the European Theater is necessary. After the success of the Operation Torch landings in Morocco and Algeria in November 1942, and the British victory over Rommel's Afrika-Korps at the Battle of El Alamein in Egypt—also in November 1942—the Allies quickly forced the Germans back into Tunisia, and, with a few setbacks (Battle of Kasserine Pass), defeated German forces in North Africa, in large part because Allied control of the sea lanes (although contested) strangled the Germans of supplies.
As it became apparent that the Germans in North Africa would be defeated by mid-1943, the Allies had to decide what to do next. There was agreement between the U.S. and the British on the overall "defeat Germany first" grand strategy for the war, but after that things could become pretty contentious. Generally, "Allied" strategy meant the Americans and British agreeing on something, and everyone else (Free French, Free Poles, even the Russians) would be told about it later, to the frequent consternation of the French and the Russians. Although today there is the view that the U.S.-British alliance during World War II was one of the most successful and harmonious in history, only the successful part is completely true. Many of the high-level strategy meetings between the U.S. and British senior military leaders were knock-down, drag-out food fights.
To grossly oversimplify the differing viewpoints, the British were convinced that the Americans were fixated on diving headlong into a bloodbath in northern France à la World War I before the Allies were really ready. The American view was that the British (still shell-shocked by their Great War experience) just wanted to beat around the bush in places like Italy and Greece, and that ideas by Prime Minister Winston Churchill to invade places like the Dodecanese Islands (huh? where?) were a waste of time and resources that would be better spent going right at the Germans. Nevertheless, the British absolutely refused to budge on invading northern France any earlier than 1944—if that—but were willing to make landings in the Mediterranean. Neither CNO Admiral Ernest J. King nor U.S. Army Chief of Staff General George C. Marshall had ever been keen on landing in North Africa to begin with, but since the Army was there, they might as well do something with it, and the plan for the invasion of Sicily was the result.
(Back to H-Gram 021 summary) 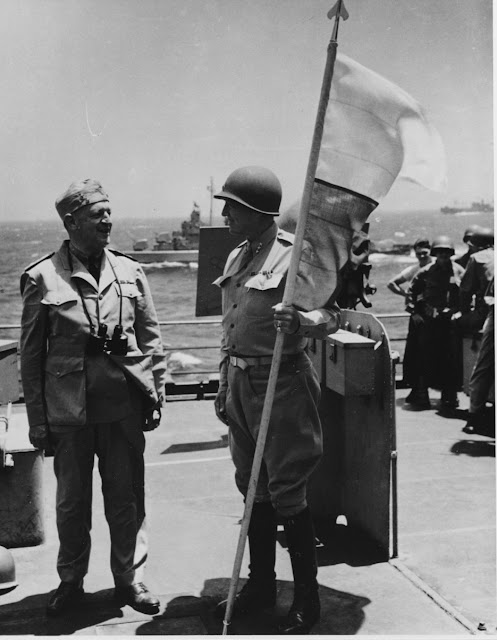