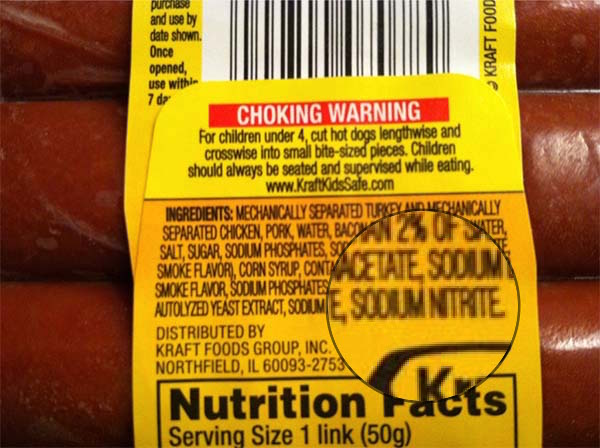 they maintain the pinkish meat coloration. Without them , the meat would appear grayish.
they add a characteristic flavor.
they ward off against clostridium botulinum, the bacteria responsible for botulism, which is a dangerous disease that causes respiratory and muscular paralysis.
3. Unfortunately, when cooked or broken down in the stomach, nitrites form nitrosamines (also called N-Nitroso Compound), which can cause cancer in young children and pregnant women. The USDA has limited the use of nitrites to 200 parts per million. Adding ascorbic acid (vitamin C) to the food product greatly reduces the formation of nitrosamines.

4. Spinach, beets, lettuce, celery, parsley, and cabbage are naturally high in nitrates. The level of naturally occurring nitrites is determined by the plant’s genetics, age, and also the amount of nitrate in the soil where the crops were farmed. Due to increased use of nitrate fertilizers in the last century, these figures are high. But don’t stop eating these veggies, many of them also contain vitamin C, naturally limiting the formation of the toxic nitrosamines.

5. Organic and Natural meat producers realize that consumers hate nitrites and avoid products that use them as ingredients. Instead these manufacturers employ celery powder. Unfortunately, the nitrites in celery powder are the same as the ones that are artificially added. In some cases, the amount of nitrite from natural sources may be higher than the amount from artificial sources. According to Applegate, one of the largest manufacturers of natural and organic deli meats:

“We are proud to use these natural ingredients rather than chemically produced sodium nitrate. We test all our products and the natural nitrates are very low – less than 40 parts per million.”


What to do at the supermarket:

Check the ingredient label next time you buy some deli style meats. If you want to avoid nitrates, your chances are higher with organic products, but not guaranteed. Your best bet is to limit hot dogs and processed meats to occasional meals. When you do choose processed meats, “organic” and “naturally raised” tend to have less of other bad ingredients.