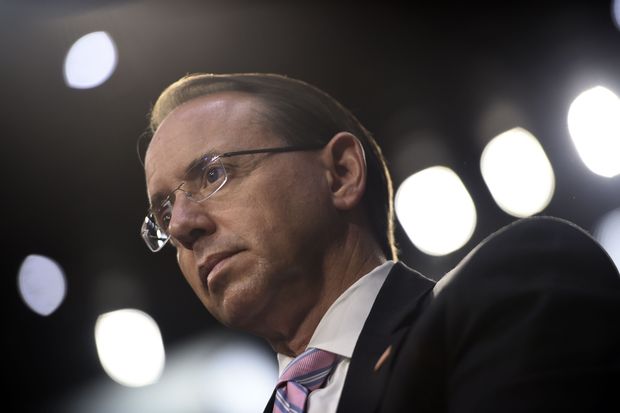 By:
Sadie Gurman and
Aruna Viswanatha

Deputy Attorney General Rod Rosenstein is headed to the White House and is expecting to be fired by President Trump, a person familiar with the matter said, creating an uncertain situation at the top of the Justice Department and in the special counsel’s probe into Russian electoral interference in the 2016 presidential election.

The situation remained fluid, however, as another person familiar with the matter said Mr. Rosenstein is expected to resign, and that discussions have been underway about his departure all weekend.

Mr. Rosenstein has not submitted his resignation, the person said.

The development comes after it was reported last week that Mr. Rosenstein in spring 2017 suggested secretly recording President Trump and recruiting cabinet members to remove him from office, according to memos written by former FBI Acting Director Andrew McCabe.

Mr. Rosenstein had disputed those assertions on Friday. In a statement released that day, he said, “I never pursued or authorized recording the President and any suggestion that I have ever advocated for the removal of the President is absolutely false.”

One person in the room when Mr. Rosenstein mentioned secret recordings said that he was clearly sarcastic and didn’t seriously consider it, according to an email from the person provided by the Justice Department on Friday.

Earlier in his tenure, Mr. Rosenstein had a rocky relationship with Mr. Trump, say people familiar with the matter. He was a regular target of Mr. Trump’s complaints about special counsel Robert Mueller’s investigation into Russian interference in the 2016 presidential election and any possible collusion between Moscow and Mr. Trump’s campaign and possible obstruction of justice.

Mr. Trump, who denies any collusion or obstruction, was warned by aides in April against firing Mr. Rosenstein, according to people familiar with the matter. Mr. Rosenstein appointed Mr. Mueller as special counsel and oversees the Mueller probe.

But in recent months, the relationship between the two men had improved, people familiar with the matter say, as Mr. Rosenstein has regularly visited the White House and navigated sometimes-competing demands from the president and his own department. Mr. Trump last month described his rapport with Mr. Rosenstein as “fantastic.”

Despite the warmer relationship, Democrats have expressed concern that Mr. Trump would try to remove Mr. Rosenstein, given his role as the overseer of the Russia probe.

Mr. Rosenstein routinely briefed the president, including on aspects of the Russia investigation, and has largely tried to satisfy Mr. Trump’s congressional allies, who have demanded increasingly sensitive information about details of the probe.


—Rebecca Ballhaus contributed to this article.
Write to Sadie Gurman at sadie.gurman@wsj.com and Aruna Viswanatha at Aruna.Viswanatha@wsj.com
Posted by Ron Ernie at 11:49