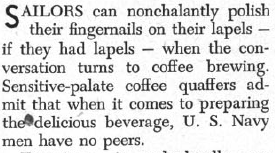 To All,
A bit of history and some tidbits.
Regards,
skip
This Day In Naval History - March 29
1844: Uriah P. Levy, the Navy's first Jewish flag officer, is promoted to the rank of captain. He also becomes the first of the Jewish faith promoted to commodore and is instrumental in persuading Congress to abolish flogging in the Navy.
1944: USS Haddo (SS 255) torpedoes and sinks Japanese army cargo ship Nichian Maru in South China Sea. Also on this date, USS Tunny (SS 282) torpedoes the Japanese battleship Musashi off Palau, necessitating for her to be repaired in Japan.
1954 - Carrier aircraft began reconnaissance near Dien Bien Phu, Indochina
1960 - Launch of first fully integrated Fleet Ballistic Missile from USS
Observation Island
1973 - Naval Advisory Group and Naval forces, Vietnam disestablished and
last U.S. prisoners of war left Vietnam.
1975 - Evacuation of Danang by sea began
1973   U.S. withdraws from Vietnam
Today in History
1886: The first batch of Coca Cola was brewed over a fire in a backyard in
Atlanta, GA. Dr. John Pemberton created the concoction as a "hangover" cure
and a stomach ache/headache remedy. He advertised it as a "brain tonic and
intellectual beverage". Cocaine was an ingredient of Coke until 1904 when
Congress banned it. It went on sale to the public on May eighth that year.
1973: After their single "The Cover Of Rolling Stone" was first played, Dr.
Hook and the Medicine Show were actually pictured on the front of that
particular magazine. The next week, their single went gold. Inside, a
"Rolling Stone" writer confirmed that members of the group (Dr. Hook and
the Medicine Show) bought five copies of the mag for their moms, just like
in the song's lyrics!
1992: Democratic presidential front-runner Bill Clinton acknowledged
experimenting with marijuana "a time or two" while attending Oxford
University, adding, "I didn't inhale and I didn't try it again."
And today is:
National Lemon Chiffon Cake Day
Thanks to Laurel.  A great bit of history. There was a very interesting TV documentary on the finding and identifying of King Richard the III remains.
Don't know if you have heard anything about King Richard III being reburied in England.  This is a well written article on his reign and things even we Americans have to thank him for, given that our system of laws comes from the English.
https://mattlewisauthor.wordpress.com/2015/03/26/richard-iii-the-answers/
laurel
1865    Appomattox campaign begins »
1973    Last U.S. troops depart South Vietnam »
Today in History
March 29
NNNNNNNNNNNNNNNNNNNNNNNNNNNNNNNNNNNNNNNNNNNNNN
Thanks to Clyde….I have seen some pretty seasoned cups over the years.
Don't Wash That Coffee Mug!
Posted on November 25, 2013 by Admin

The obsession began over seven years ago.  In 2006, I began at the Hampton Roads Naval Museum as a wide-eyed intern, ready to take on the new and fascinating world of naval history.  I thought the coffee mess at work was reserved for staff and volunteers only.  I did not feel comfortable partaking in the delicious brew until somebody told me I could.  When I finally got the green light, I happily brought my coffee mug in the next day, eager to drink from the well all working class souls go to each morning.
This was my first experience with "Navy coffee."  It was hot and strong.  Very strong.  The thickness of it closely resembled crude oil.  It tasted both wonderful and terrible at the same time.  Your mind can trick you into believing anything.  When a supreme pot of joe is brewed, many of the volunteers would call it "Signal Bridge Coffee," recalling the nostalgia of long nights and many cups consumed.
After that first morning of coffee, I went to the break room to wash my cup and let it dry for the next day's angry fix.  As I washed out my cup, I felt the sting of glaring eyes from behind my back.  I'm sure whoever it was, they could sense my hesitation.  I turned around to see GMC Dana Martin, the museum's active duty OIC.  He had a puzzled, concerned look on his face.  Chief Martin was grizzled and salty.  He was by far one of the saltiest sailors I have ever met.  He grabbed my arm washing the cup.  My hesitation grew to fear.  He leaned in close and told me to "never wash it again," staring back down at my cup and back to me.  I looked at him, puzzled with fascination and disbelief.  Although I drink my coffee black, my mind struggled to find reason in the practice.
"I don't understand," I told him.  "I need to clean my cup."  I was merely doing what I was taught.  Bills should be paid on time.  Five minutes early is five minutes late.  Coffee mugs should be washed out after use.  Simple, right? Wrong.  I held my  breath and found out just how wrong I really was.
He leaned in again, this time more relaxed (and less confrontational).  "I know you are just starting out here, but I want to let you in on a little secret."  He was almost whispering.  "If you intend to stay here at the museum, you can impress the Navy guys with your mug."  He went on to explain to me the significance of an unwashed or "seasoned" coffee mug, particularly in the Navy Chief community.  "And keep it as tarry black as possible," he added.  "Sometimes it's the only way you can drink this swill.  But you will grow to love it and depend on the taste."  I would never think I would believe him.  Boy, was I wrong.
Old coffee in a cup signifies seniority and stature in the military, particularly on deployment.  As one blogger noted, "You may not be able to embrace your loved ones while you are gone, but at least you can still taste the same coffee you drank the day you left."
To many in the military, this is nothing new.  Ask anybody who served or is currently serving in the military, and they will likely give you a story about an experience involving the practice of "seasoning" their cup.  Navy Chiefs, however, are considered by many to be the most Spartan of stalwarts to the unwashed coffee mug.  I spoke to some retired CPOs who counted four or five deployments on a single unwashed cup. The August 1949 edition of All Hands Magazine declared that coffee was the "Lifeblood of the U.S. Navy."  The article goes on to discuss why many sailors take their coffee so seriously.  The article opens with this paragraph:

The 1945 Cookbook of the United States Navy lists several reasons why a clean mug and pot of coffee is essential to a flavorful experience.  All parts of the coffee mess had to be "scrupulously clean," according to the cook book.  Sailors today might read those guidelines and laugh at the rules and regulations.

Several recent articles about the practice surfaced on the internet on message boards and military news blogs.  One blogger from the Military Times (Broadside Blog) wrote about it this past August.  "There are only a few things you need to know about Navy coffee, and most of it involves the cup,"  the blogger writes.  "You do not wash a Navy coffee cup. Ever."
I took Chief Martin's advice, but not at first.  For the first few weeks following our confrontation, I washed my cup out after he left for the day.  But I got lazy after a while.  I starting noticing dark brown rings inside my cup.  My mug started to look like the inside of a tree, and I started to like it.  The mug was white, so it was easy to measure my progress.
The rings grew larger and darker until the entire inside was jet back.  Although I was never in the military, I felt a swelling of pride at my Frankenstein creation.  Unfortunately, that mug did not survive.  My latest and greatest creation came about in 2009.  It has not been washed or cleaned since its purchase.  I don't know if my peers understand it.  My wife surely doesn't.  I have a similar mug at home that she avoids looking at, and, on rare occasions, will clean when I am not looking.
Here is my (meager) contribution to this fine naval tradition.  I warn you, if you are unfamiliar with the practice, you might be shocked.  Behold: My four year "seasoned" mug:

Be prepared to be amazed😃

By Travis Tritten • 3/28/17 5:59 PM
The Washington Examiner
http://www.washingtonexaminer.com/navy-marines-fighter-jet-shortfall-may-top-100-aircraft/article/2618708?utm_source=Sailthru&utm_medium=email&utm_campaign=3.29.27%20EBB&utm_term=Editorial%20-%20Military%20-%20Early%20Bird%20Brief
Trump's Defense Budget Misses The Point
According to President Donald Trump, his administration is set to allot $54 billion towards the defense budget in 2018. The president boasted this to be, "one of the largest increases in national defense spending in American history." But some experts believe that the numbers don't quite add up. Iraq War veteran and Director of the Future of Warfare Initiative at the Center for a New American Security, Paul Scharre says of the plan, "It's an Obama-esque budget with a Trump-sized sales pitch."
Navy and Marine Corps leaders told the House Tuesday they badly need more "metal on the flight lines" — not disputing an estimate by one lawmaker the services have a shortfall of about 100 strike fighter aircraft.
Top brass representing the service's aviation programs asked the House Armed Services Committee to support more purchases of Boeing F/A-18 Super Hornets and Lockheed Martin F-35 fighter jets after recent revelations that about half of Navy and Marine Corps aircraft are not ready to fly.
"As far as our budget, and what we ask for, we asked for some additional F-35s out there in the budget, that's what I need to get. I need more metal on the flight lines," said Lt. Gen. Jon Davis, the Marine Corps' deputy commandant for aviation.0:55 :13
The testimony comes as Congress works on a delayed 2017 defense appropriations bill and a $30-billion Pentagon supplemental funding request — a potential increase of 36 F/A-18 Super Hornets, and six F-35 joint strike fighters.
Since 2013, the services have been hit by caps on defense spending, high operations and delays in the delivery of the F-35 that have left much of the fleet aging and unreliable.
The exact number of new aircraft needed to turn around might be difficult to pinpoint, according to the testimony.
"To start with, is it over 100?" said Rep. Mike Turner, R-Ohio, chairman of the House Armed Service's tactical air and land forces subcommittee.
The Navy and Marine Corps are using up aircraft faster than new ones can be purchased or older aircraft can be upgraded, said Rear Adm. Chip Miller, director of the Navy Air Warfare Division.
"So about 35-39 aircraft at the current rate we are flying our strike fighters is what we are consuming per year," Miller said. "We are not replacing them at that rate."
That rate has been continuing for several years, Miller said.
"Do you have to buy new airplanes to replace and get in front of that? If that is a solution set, then, yes, you could argue that 100 is the number" of the services' strike fighter shortfall, he said.
NNNNNNNNNNNNNNNNNNNNNNNNNNNNNNNNNNNNNNNNNNNNNNNN
Thanks to Fred