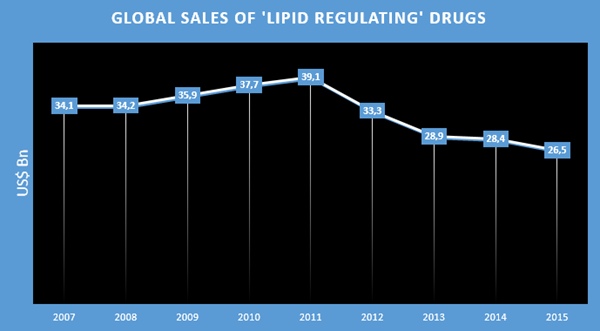 Source: IMS Health statistics
Statins are NOT the answer to heart disease
Sales of statins and other 'lipid regulating' drugs are built on a deeply cynical combination of fear and lies – the fear that cholesterol supposedly causes heart attacks, and the lie that statins are the answer. Far from being an undesirable substance, however, the fact is that cholesterol is actually essential to our bodies. A structural constituent of the walls of billions of cells, it is the precursor of important biological molecules such as vitamin D and the hormones estrogen and testosterone.
Moreover, so long as blood vessel walls are structurally intact, there is no scientific evidence that cholesterol, even at moderately elevated levels, damages them or causes atherosclerotic plaques and heart attacks. To have a damaging effect on otherwise intact blood vessel walls in test animals, cholesterol must be artificially increased to levels essentially never observed in humans.
Significantly, therefore, with skepticism about the cholesterol theory of heart disease growing even among orthodox cardiologists, researchers were said to have been "stunned" earlier this year to learn that evacetrapib, a new cholesterol-lowering drug produced by Eli Lilly, did not reduce the risk of either heart attacks, strokes, or death.
As the ongoing cholesterol drug failures therefore remind us, in order to successfully control heart disease it is essential that we correctly identify its root cause.
The end of heart disease is now possible
In April 2015, scientists at the Dr. Rath Research Institute in California published a groundbreaking study in the American Journal of Cardiovascular Disease proving that heart disease is an early form of the vitamin C deficiency disease scurvy. Building on a discovery made by Dr. Rath in the early 1990s, the publication of this research dealt a major blow to the cholesterol theory of heart disease and the Pharma Cartel's sales of cholesterol-lowering drugs.
As Dr. Rath's work has shown, coronary heart disease occurs for precisely the same reason that clinical (early) scurvy does – a deficiency of vitamin C in the cells composing the artery wall. Unlike animals, humans develop heart disease because their bodies cannot produce vitamin C. While the average human diet provides enough vitamin C to prevent scurvy, this is not enough to guarantee stable artery walls. As a consequence of the insufficient supply of vitamin C, millions of tiny cracks and lesions develop in the artery walls. Subsequently, cholesterol, lipoproteins, and other risk factors enter to repair this damage.
Of all these risk factors, by far the most important is a molecule known as Lipoprotein(a). Primarily found in humans and sub-human primates, Lipoprotein(a) functions as a repair molecule compensating for the structural impairment of the vascular wall. In general, animals that produce vitamin C in their bodies do not produce Lipoprotein(a). In human beings, in the case of a chronic deficiency of vitamin C, the arterial repair process becomes continuous. Over the course of many years, atherosclerotic deposits develop. This eventually leads to the occurrence of heart attacks and strokes.
Almost a quarter of a century ago, Dr. Rath and two-time Nobel Laureate Dr. Linus Pauling issued their historic "Call for an International Effort to Abolish Heart Disease". Today, it is becoming increasingly clear that the possibility of eliminating heart disease as the major cause of death and disability is closer than ever before. The more of us who commit ourselves to reaching this goal by sharing the facts as widely as possible, the sooner it will be achieved.
3 November, 2016
NNNNNNNNNNNNNNNNNNNNNNNNNNNNNNNNNNNNNNNNNNNN
Thanks to Chuck….Find your old home
U.S. Camps in Vietnam
http://campsabrekorea.com/us-camps-in-vietnam.html
NNNNNNNNNNNNNNNNNNNNNNNNNNNNNNNNNNNNNNNNNNNNN
https://fightersweep.com/6358/in-the-seat-with-agcas-those-lost-and-those-saved/