War Drums - It's not a new Cold War. It's not even a deep chill. It's an outright conflict!


Washington (CNN)It's not a new Cold War. It's not even a deep chill. It's an outright conflict.
US-Russia relations have deteriorated sharply amid a barrage of accusations and disagreements, raising the stakes on issues ranging from the countries' competing military operations in Syria, disputes over Eastern European independence and escalating cyber breaches.
"This is a conflict, there should be no doubt," said Matthew Rojansky, director of the Kennan Institute at the Wilson Center, on the US-Russia confrontation. 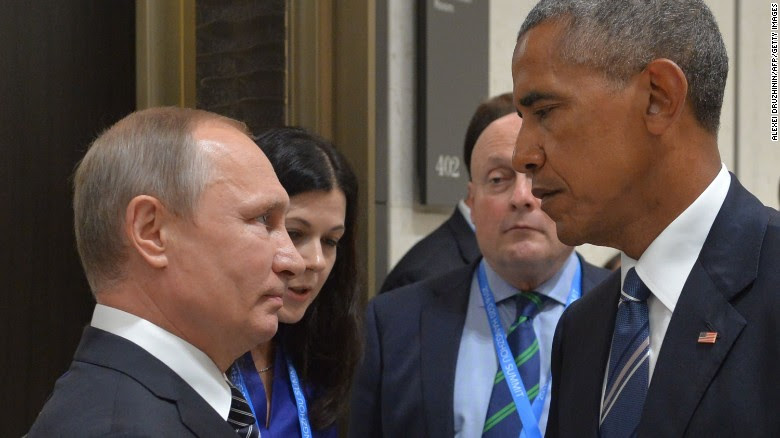 Russian President Vladimir Putin meets with his President Barack Obama on the sidelines of the G20 Leaders Summit in Hangzhou on September 5, 2016.
Lavrov denies Russian influence over US election
On Tuesday, White House Press Secretary Josh Earnest said the US was considering a "range" of "proportional" responses to alleged Russian hacking of US political groups. Washington publicly accused the Kremlin of cyberattacks on election systems and the democracy itself last Friday. That came after talks on a Syria ceasefire broke down as US officials suggested Russia be investigated for war crimes in the besieged city of Aleppo.
Moscow has steadfastly denied that it's meddling in the US presidential election. In an interview this week with CNN's Christiane Amanpour, Russian Foreign Minister Sergey Lavrov said it was a baseless accusation.
"It's flattering, of course, to get this kind of attention -- for a regional power, as President Obama called us some time ago ... We have not seen a single fact, a single proof," Lavrov said.
Democratic presidential nominee Hillary Clinton has pointed to the hacks as evidence that Russia favors her GOP opponent, Donald Trump. Appearing at an investment forum in Moscow on Wednesday, Russian President Vladimir Putin dismissed that charge.
"There was a whole hysteria about that being of interest to Russia, but there is nothing within the interest of Russia," Putin said.
"The whole hysteria is aimed at making the American forget about the manipulation of public opinion," he added. "No one is talking about that, everyone wants to know who did that, what is important is what is inside and what that information is about."
Meanwhile, Moscow abruptly left a nuclear security pact, citing US aggression, and moved nuclear-capable Iskandar missiles to the edge of NATO territory in Europe. Its officials have openly raised the possible use of nuclear weapons.
And that's just the highlight reel.
The friction between Moscow and Washington -- by many assessments at its highest level since the fall of the Berlin Wall -- led Mikhail Gorbachev, the last leader of the Soviet Union, to make a plea Monday for dialogue and de-escalation.
White House: We will respond to Russia hacks
"I think the world has reached a dangerous point," Gorbachev warned, according to Agence France Presse.
"This needs to stop. We need to renew dialogue," Gorbachev said, commenting on the US decision to call off Syria talks. 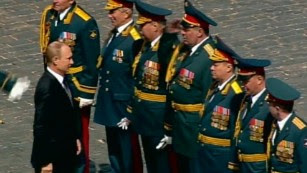 Russia moves nuclear missiles to Europe border 02:14
"Indeed, it's not a Cold War," said Igor Zevelev, former director of the MacArthur Foundation's Russia office. "It's a much more dangerous and unpredictable situation."
It's unlikely that tensions will ebb anytime soon, with the very real possibility of a building tit-for-tat dynamic developing at a time when channels of communication between the two capitals have dwindled.
A Western diplomat said past confrontations between the West and Russia followed a typical pattern of a slow escalation and a mutual understanding on both sides when it was time to stop.
With Russia's actions in Syria, its decision to put nuclear-capable missiles at NATO's doorstep and its cyberattacks, the diplomat said, "you have the impression they are escalating by themselves and going to the extreme."
"This is a very different system," the diplomat said. "When you listen to these new Russians, this is not the strategic balance that we knew. It is unusual and dangerous."
Recent incidents include harassment of US diplomats in Moscow and Russian claims that its foreign service officers are badgered in the US, several occasions in the past year when Russian jets and naval vessels have buzzed the US military and Moscow's 2014 violation of a core security treaty by testing a ground-launched cruise missile. The list goes on.
Russia protests anti-Trump comments by top UN official
"The quality of relations between us is certainly at the lowest point since the Cold War," said Russia's ambassador to the US Sergey Kislyak. "The risk of miscalculations has increased," especially with NATO forces "being deployed next to our borders," Kislyak said in remarks at Johns Hopkins School of Advanced International Studies.
The ambassador said that "normal channels of communication are frozen" between the US and Russia. "We see the United States taking unfriendly steps toward Russia including sanctions, there are calls for isolating Russia," he said, adding, "it doesn't work with Russia and it's not going to work."
Lavrov told interviewers from Russia's Channel One that Moscow had pulled out of the nuclear security pact on plutonium on October 3 because of "aggressive anti-Russia tendencies at the basis of the US policy on Russia."
He pointed to NATO deployments, infrastructure and missile placement as examples of "aggressive steps that have a direct bearing on our national interests and can affect our national security."
On the US side, Lavrov's counterpart Secretary of State John Kerry led the call for a war crimes investigation into Russia's actions in Syria and has said that the US will retaliate for what it sees as interference in the 2016 presidential vote.
"They're not, quote, 'getting away with it' for free," Kerry said Monday in Palo Alto, referring to hacks on US election systems and political parties.
Russian presidential spokesman Dmitry Peskov dismissed the accusations as "nonsense" on Friday, according to the state-run Interfax News Agency.
Even so, the US has sent Russia a "very clear" message about "the unacceptability of interference with democracy in the United States of America," said Kerry. He warned that "we will and can respond in ways that we choose to, at the time of our choice." 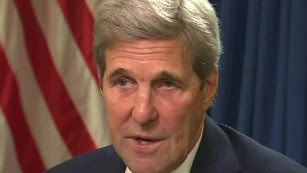 Kerry doesn't believe Russia will affect the election 02:19
In light of the tensions, Gorbachev urged a "return to the main priorities" between Russia and the US.
"These are nuclear disarmament, the fight against terrorism, the prevention of an environmental disaster," he listed. "Compared to these challenges, all the rest slips into the background."
Russia vetoes UN resolution to halt Aleppo airstrikes
Yet change any time soon is unlikely. Putin has consolidated his hold on parliament and looks set to be re-elected within the next 18 months.
He has a prickly track record with Clinton, who he accused of instigating December 2011 demonstrations against him while she was secretary of state. For her part, Clinton joked in 2008 that then-President George W. Bush couldn't have gotten a sense of Putin's soul, as he had claimed, because the Russian president is a former KGB agent and that means "by definition he doesn't have a soul."
Trump has repeatedly praised Putin, downplaying Russian actions in Syria and on hacking, and at one point calling on Russia to help probe his rival's email accounts.
"I think it would be great if we got along with Russia," Trump said Sunday at the second presidential debate.
In his interview with CNN's Amanpour, Lavrov called it "ridiculous" to suggest that "Russia is interfering in the United States' domestic matters."
But Lavrov nevertheless made reference to last week's bombshell that rocked the presidential race: an unearthed tape from 2005 in which Trump can be heard bragging about groping women and grabbing their genitalia.
"There are so many p***ies around your presidential campaign on both sides that I prefer not to comment," Lavrov told Amanpour.
Regardless of who inhabits the White House next, Putin isn't likely to alter his course. Aligning Russia with Syria, countering the US at the UN Security Council and pushing back against NATO by flying bombers along the western Atlantic coast in September, among other moves, serve the Russian leader at home.
"You'd think 'why is he worried,' but there's clearly concern on some level" on Putin's part about the upcoming presidential elections "and this shores up his popularity," said Angela Stent, director of the Center for Eurasian, Russia and East European Studies at Georgetown University.
It also distracts Russians from the economy, which the Eurasia Group, among other analysts, assess has a long-term negative outlook.
"It helps to have an enemy if people are feeling the economic pinch," Stent said. "If people think we're going to be at war with the US, they forget about the cost of food."
The cyberattacks may also represent a kind of payback. Putin "really believes the US is responsible" for the December 2011 demonstrations against him, Stent said. He may be telegraphing, "You think you can interfere in our elections? Well, we can do the same thing, too," she said.
There are global elements to the Russian leader's strategy that also signal continued tensions. Putin is "driven by big ideas about Russia's role in the world," said Zevelev, a fellow at the Wilson Center. Putin wants to limit America's world leadership role, curb what he sees as an American inclination for "regime change," and show that Russia too can use military force to achieve foreign policy goals.
"Putin wants to assert Russia as a global power with great ambitions," Zevelev said, "and in order to demonstrate it, Moscow has to do something in the world arena from time to time."
The Wilson Center's Rojansky said Russian "messaging is clear -- 'if we are not getting what we want on one front, we will escalate on other fronts.' "
Moscow could do that by reigniting frozen conflicts in Europe, Rojansky said, taking on other regional interventions or even aligning with China to support Beijing's aspirations for dominance in the South China Sea.
And he pointed out that the Russians "have signaled in a couple of ways that they are willing" to use nuclear weapons.
"This is the most dangerous time since I don't know when," said Stent of Georgetown University, who added that the next few months before the new US president takes office will likely be eventful.
"Russia understands they have another couple of months until January where nothing much is going to happen, and why not take advantage of that," she said.
CNN's Tom Kludt and George Kazarian contributed to this report.
Posted by Ron Ernie at 11:56