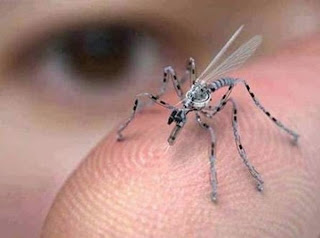 Have you  ever wished you could be a fly on the wall to spy on what's  going on or being said? How about being a mosquito  instead!

No, this  isn't a real mosquito. It's an insect spy drone for urban  areas, already in production, funded by the US  Government.
It can be  remotely controlled and is equipped with a camera and a  microphone.
It can  land on you, and even has the potential to take a DNA sample  or leave RFID tracking nanotechnology on your  skin.
It can fly  through a slightly open window, or it can attach to your  clothing until you unwittingly take it into your home. It can  then be guided to the top of a curtain  or other invisible location where it can scope entire rooms  and monitor everything being  said.
Given  their propensity to request macro-sized drones for  surveillance, one is left with little doubt that the  government has big
plans for  these micro gadgets.

(And to think we were  worried about West Nile virus!)

By Rowan Scarborough - The Washington Times - Wednesday, October 29, 2014
The agency in charge of protecting the Pentagon has sent out a warning that "ISIL-linked terrorists" want to attack employees and is urging them to change routines and mask their identities.
The Pentagon Force Protection Agency, citing intelligence reports, says members of the Islamic State terrorist group, also known by the acronym ISIL, may use knives, guns or explosives.
"Recent threats, revealed through various intelligence and law enforcement sources, indicate that terrorists, directed or inspired by the Islamic States of Iraq and the Levant (ISIL), view members of U.S. military members and law enforcement officers as legitimate targets for attacks," the agency warns in memo that The Washington Times has obtained.
The warning represents one of the Obama's administration's most extensive domestic responses to the Islamic State. The violent al Qaeda-linked terror group, which controls parts of Syria and Iraq, is urging followers via social media to kill Westerners, especially government and military personnel.
"Attacks would most likely involve edged weapons, small arms, or improvised explosive devices (IEDs), and could be perpetrated with little-or-no advanced warning," says the Oct. 24 two-page warning. "In light of these threats and recent attacks in the United Kingdom, France, and Canada, remaining vigilant is paramount.
"It is important that you ensure all members of your family are made aware of this valuable information so they not only protect themselves, but also become an integral part of the overall community antiterrorism effort."
The alert is titled "Recent Threats and Individual Protective Measures."
The alert lists 11 protective steps that require employees to alter their ways of life, including:
⦁ Remove decals and other identifiers from clothing and vehicles.
⦁ Vary travel routes.
⦁ Avoid large gatherings and places where people congregate.
⦁ Guard what you post on Facebook and Twitter.
⦁ Do not post anything that links you to the Defense Department.
⦁ Do not post any opposition to terrorist groups.
http://www.washingtontimes.com/news/2014/oct/29/pentagon-issues-islamic-state-warning-to-staff-rem/
NNNNNNNNNNNNNNNNNNNNNNNNNNNNNNNNNNNNN
Thanks to Gloria
A husband went to the police station to report his missing wife:

Husband : I've lost my wife, she went shopping yesterday and has still not
come home.

Sergeant : What is her height ?

Husband : Not slim, not really fat, but could loose a few.
Sergeant : Color of eyes?

Husband : Dark. Not sure - maybe Brown.

Sergeant : What was she wearing?

Husband : I don't remember exactly but she wears jeans a lot.

Sergeant : Did she go in a car?

Sergeant : What kind of car was it?

Husband : 2015 Corvette Stingray 3LT with the Z51 Performance Package, shark
gray metallic paint,  with the 6.2 litre V8 engine with Direct Injection
generating 460 HP. 8-speed paddle-shift automatic transmission, and Black
leather GT bucket seats, and has a very thin scratch on the front left door
near the....... at this point the husband started crying...